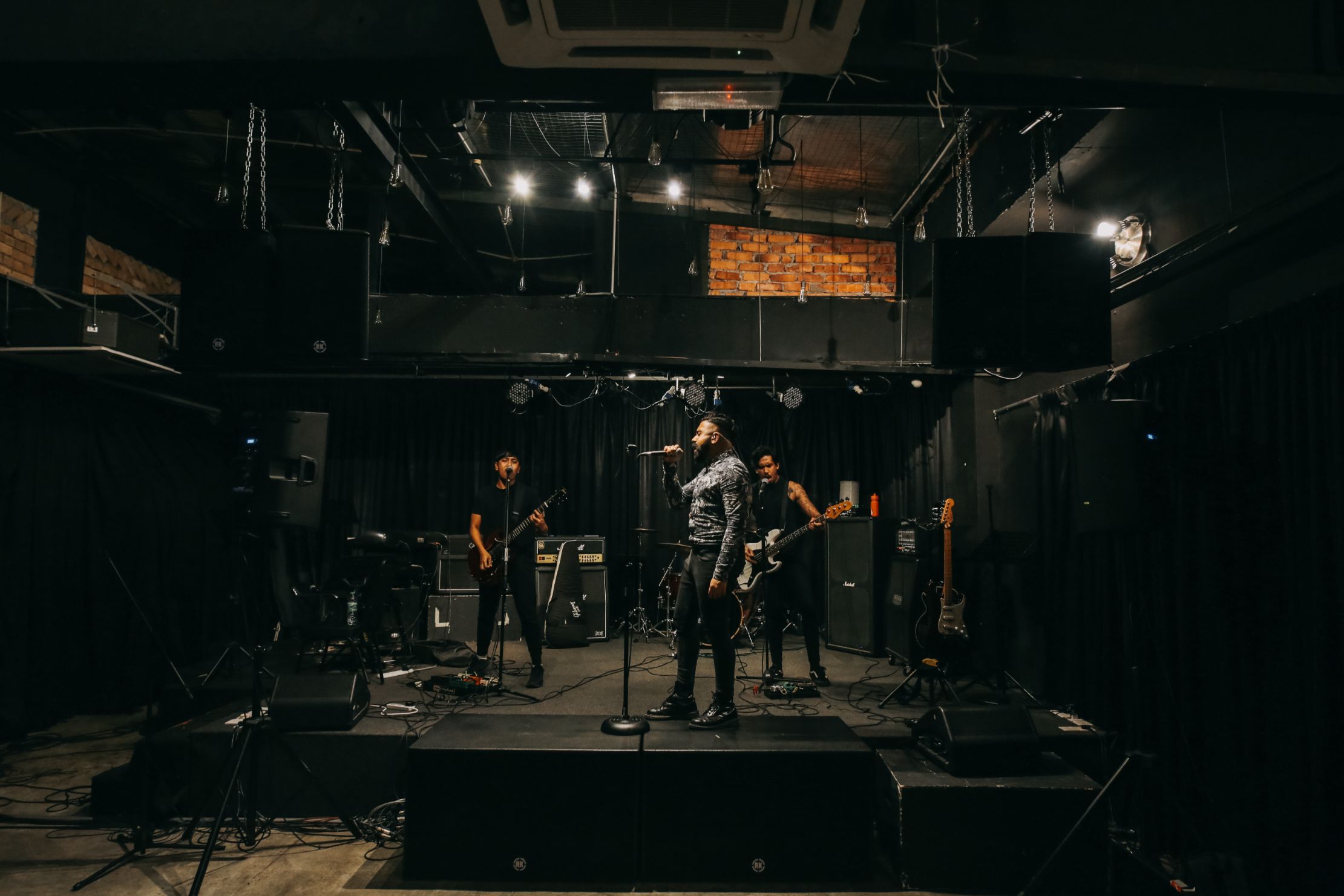 It’s an unspoken fact that the pre-millennials around us will somehow end up to listen back to punk rock when we feel the need to reminisce the old days, that first crush, and screaming your lungs out in frustration, exasperation, often in the name of love . There’s just something about venting it out to no one that resonates so well to us. Take for instance, “Only One” by Yellowcard. There’s nothing more to say after that really.

Trophy Knives is in the same cohort, singing about honest problems, sung and played by honest people who just want to be heard, and they’re doing a damn fine job at it. Coming back from their album launch at Urbanscapes, we managed to catch them and talk about who they are, their album, and why punk rock in an era where hip-hop and R&B are thriving the most.

Who are Trophy Knives?

Syamir: I’m Syamir. I play bass and we sing together.

What genre do you guys play?

Syamir: Essentially we’re a punk rock band. I’ll call it stadium arena punk rock because we’ve got big choruses but still with the punk rock essence in it. That’s I guess if you want to break down so many things but it’s punk rock in general.

So what was the thought process and inspiration behind the name?

Vinesh: I’ve been asked that question heaps of times, I wish I actually had a proper answer. Hahaha

I guess it’s one of those scenarios where we had a bunch of songs written prior to having a band name and I’ve always loved  band names like Sum 41, Green Day and NOFX,band names that never had a specific meaning but somehow those names represented those bands perfectly. So I suppose that is why we settled for Trophy Knives,it just sounds like a punk band,plus the name Trophy Wives was already taken, unfortunately.

So why specifically punk rock?

Syamir: We didn’t really choose the genre. We jammed together as friends a long time ago and we never made  conscious decisions like  “I wanna sound like this”, or “I wanna sound like that”. It’s basically all those influences over the years  that we’ve had on our Walkmans,and our computers. Trophy Knives is a product of all of our youth, put together in songs. 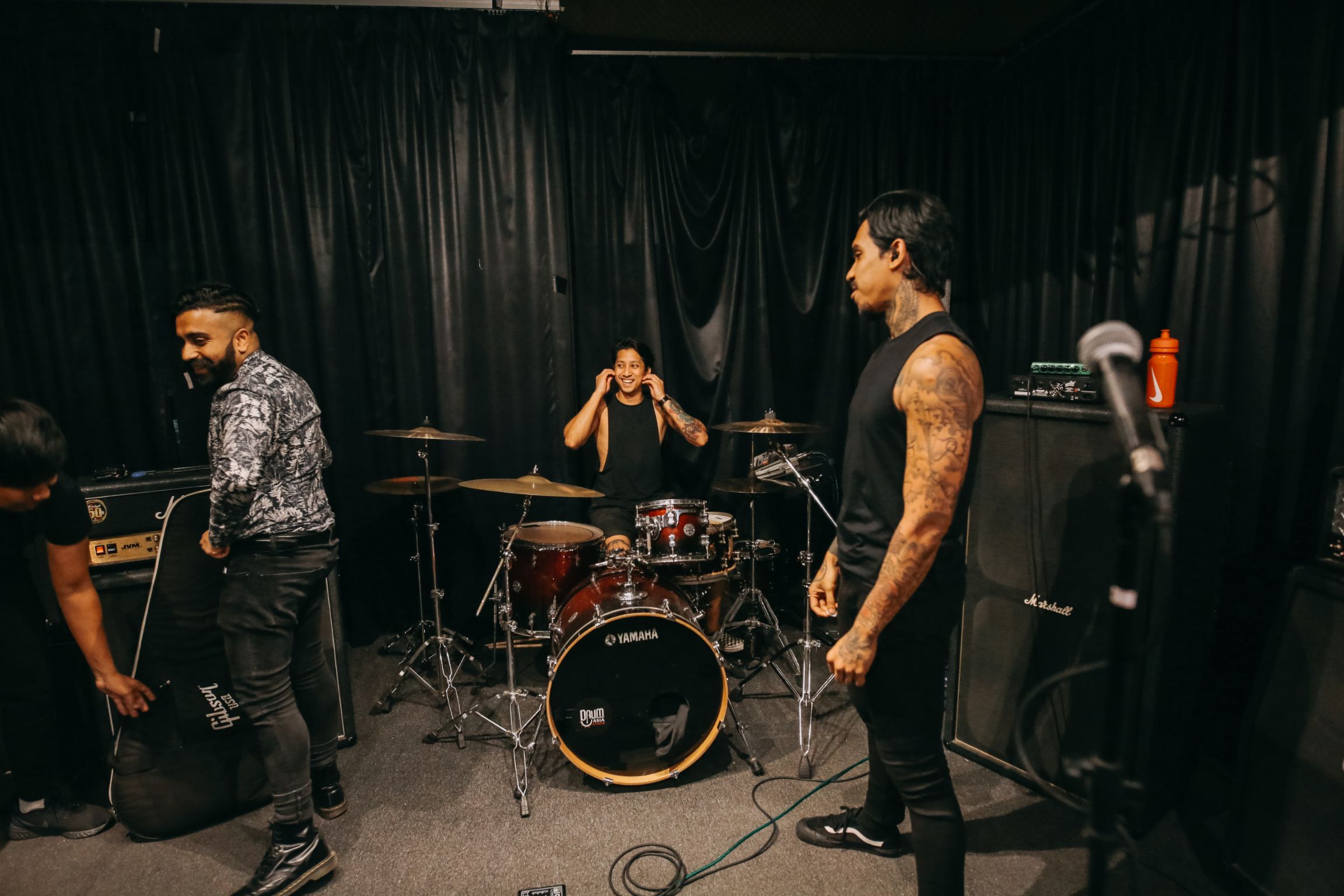 Who writes the songs?

Ryan: It’s an interesting process for me because it’s basically reverse engineering. I mean most commonly drums are the one being laid out first and everything gets built on top of that. Slightly different here in the sense that Sani kinda has a base layer of drums for the song and then I take over after that and I put my take on it.

So you guys cited Billy Talent, Alkaline Trio as some of your inspirations. How do you incorporate those elements or rather their style of music into yours?

Vinesh: I suppose we are what we listen to! We absolutely adore Billy Talent,Alkaline Trio and bands like that,but I have to say collectively,we sound nothing like them and we definitely have our own unique stamp on our tracks. 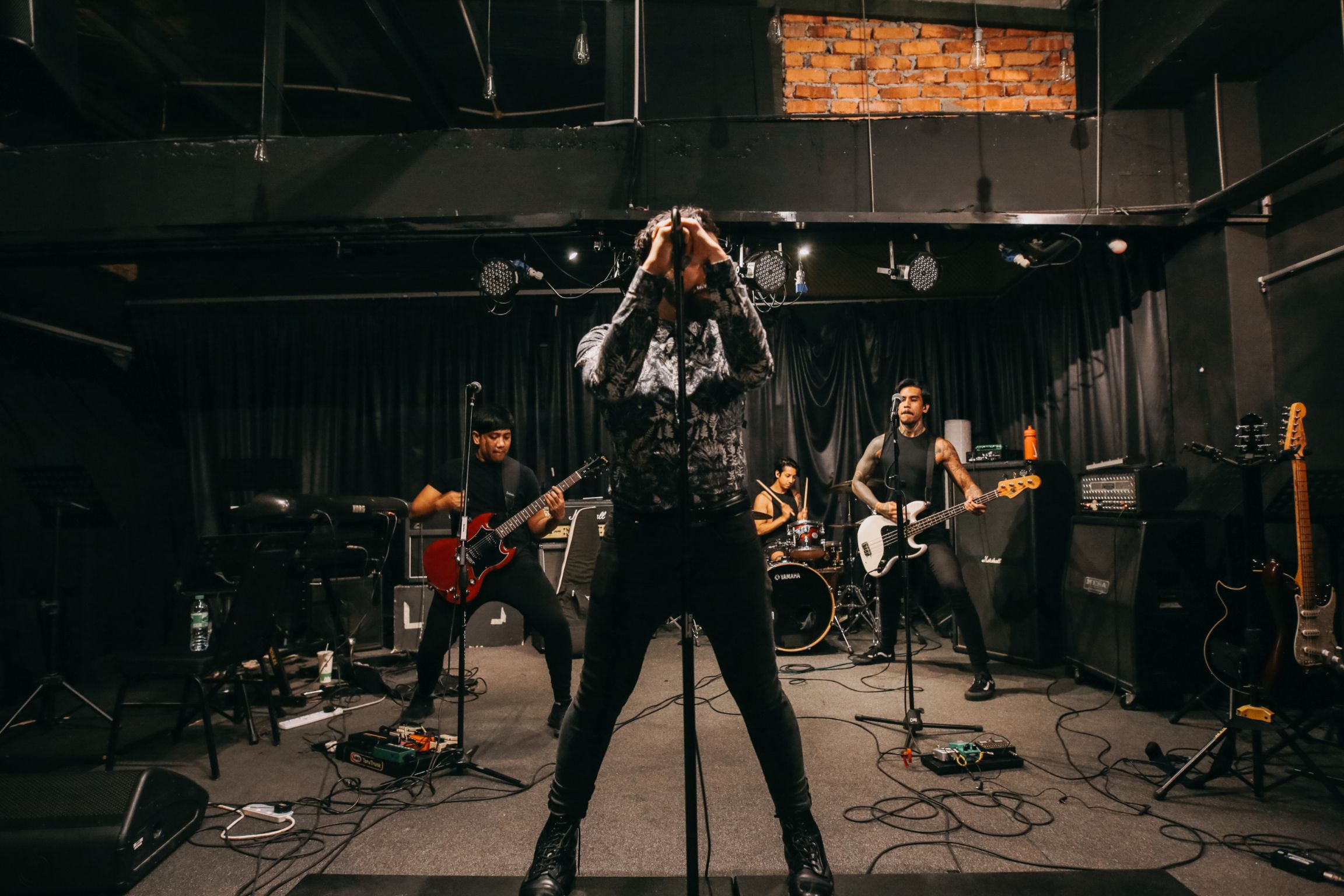 In a world currently dominated by rap, R&B and pop. How does this punk rock scene stays afloat?

Syamir: So I believe, I really believe, that punk rock will never go away for that matter. It’s only who takes the spotlight at the very moment. It’s all about striving in your own environment. Who’s to say that there is no punk rock scene out there? I really believe like in the air of all these major, major genres, there are pockets of music that are still thriving and I think it’s a cycle. I really think, give it a year or two, punk rock will come back to the radio. And I think after a while, the kids will realize that punk rock is just more relatable. Pop and all these SoundCloud rap, is cool, and it sounds great in the club and all but does it really relate to you in a sense? Do you think it will be there for a long time? It really won’t, but this stays, I guess. You know? And anything that’s written in an honest way in the form of punk rock which I believe we believe so, it will sustain the test of time. There are times where it will just be in the background,but it’s absolutely going nowhere.

What are some of your favourite local bands?

Vinesh: Daighila is personally my favourite local band. There is a method to their madness and their live shows are absolutely stunning. Besides that, I affectionately call these bands “The Class Of 2017”,because we all started playing shows around the same time in 2017, Milo Dinosaur, Berdosa,Sweetass are fantastic bands and I’m extremely glad that each and every one of these bands are finding success in their own way.

Ryan: I agree for the most part, I also really enjoy Bittersweet and Seven Collar T-shirt. These are all bands that I discovered pretty late in my life. I spent a lot of my high school years listening to whatever was fed to me on the radio and only discovered X FM. X FM also was fed to me a lot later! So I basically lived on X FM and I heard everything I wanted to from Malaysian music, but the ones who stood out were always those two. 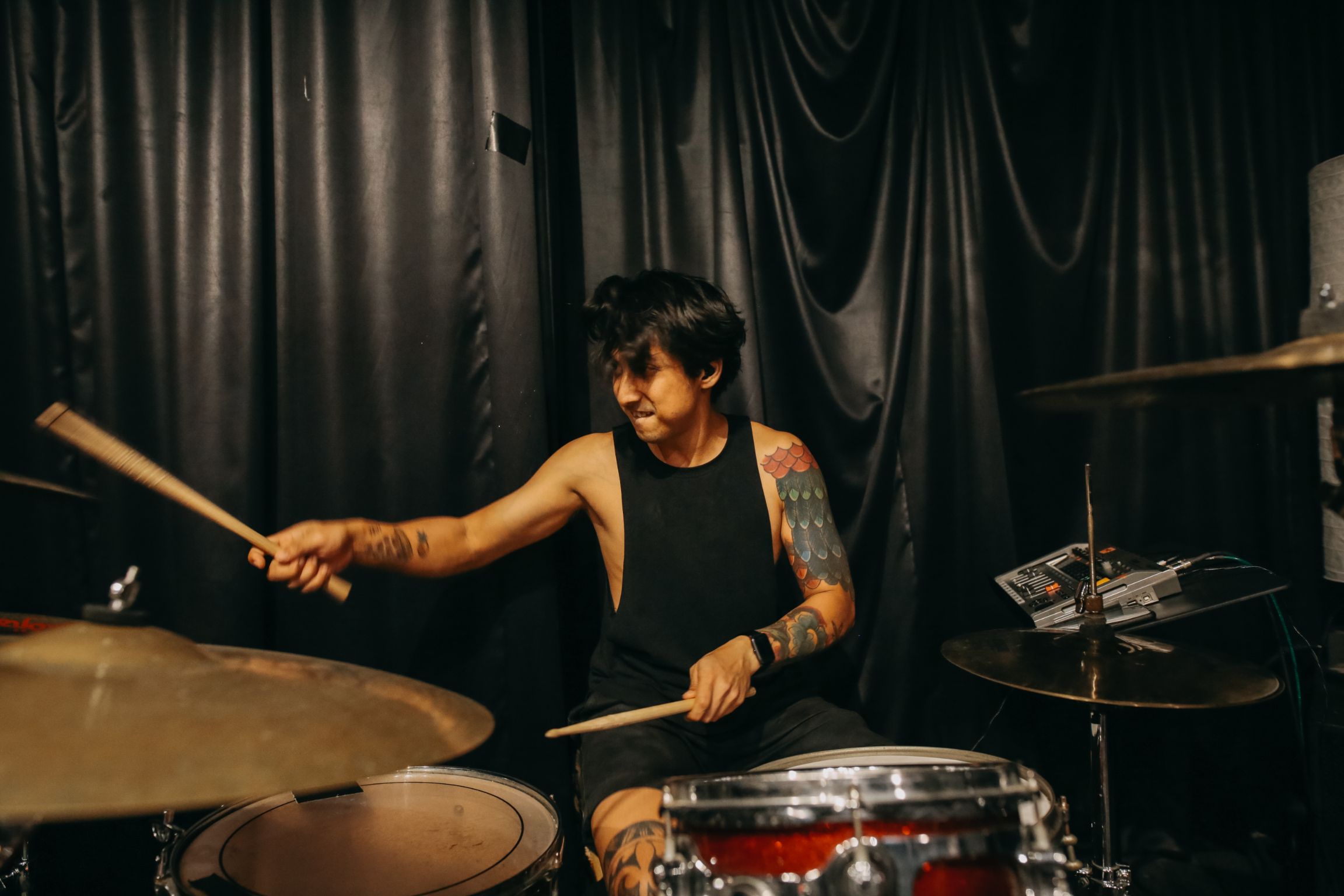 What does your music speak to the audience, what kind of message do you guys want to deliver?

Syamir: We don’t want them to feel anything, we just want them to know that we are like them, you know that daily struggle that is in the blue collar white collar line, and it’s not all fun and games like what you hear on the radio hahahaha. The songs that we write are what we feel on a daily basis and I feel that they feel the same as well, so we like to think that we’re almost speaking on their behalf, voicing their anger, concerns, empathy, sympathy, and that’s what we wanna do, we wanna connect with them. We’re all friends here!

Explain to us what Glass Ceiling is all about.

Vinesh: We’ve been in a band for 3 years and it just feels right to put out a full length right now.The title ‘Glass Ceiling’ just fits with the situation,we were extremely frustrated with the lack of shows offered to us so we went out of our way and booked an Australian tour,we all worked extra jobs just so we could go on tour,and when we were touring Australia,we realised that if opportunities weren’t given to us we’ll carve our own path and do things our way.

Syamir: Don’t get us wrong, we’re a punk rock band and all that, but we do want to appeal to a bigger audience, and I feel the title is so apt for that, we’re shattering the glass ceiling above us, we’re breaking the barriers we thought people built around us, and we just need to push through. We need to find the next level, and this album is the next level.

So what’s in store for the band in the future?

Vinesh: We can’t give too much away yet,but I can confirm that we will be touring China,Japan and Taiwan in 2020! 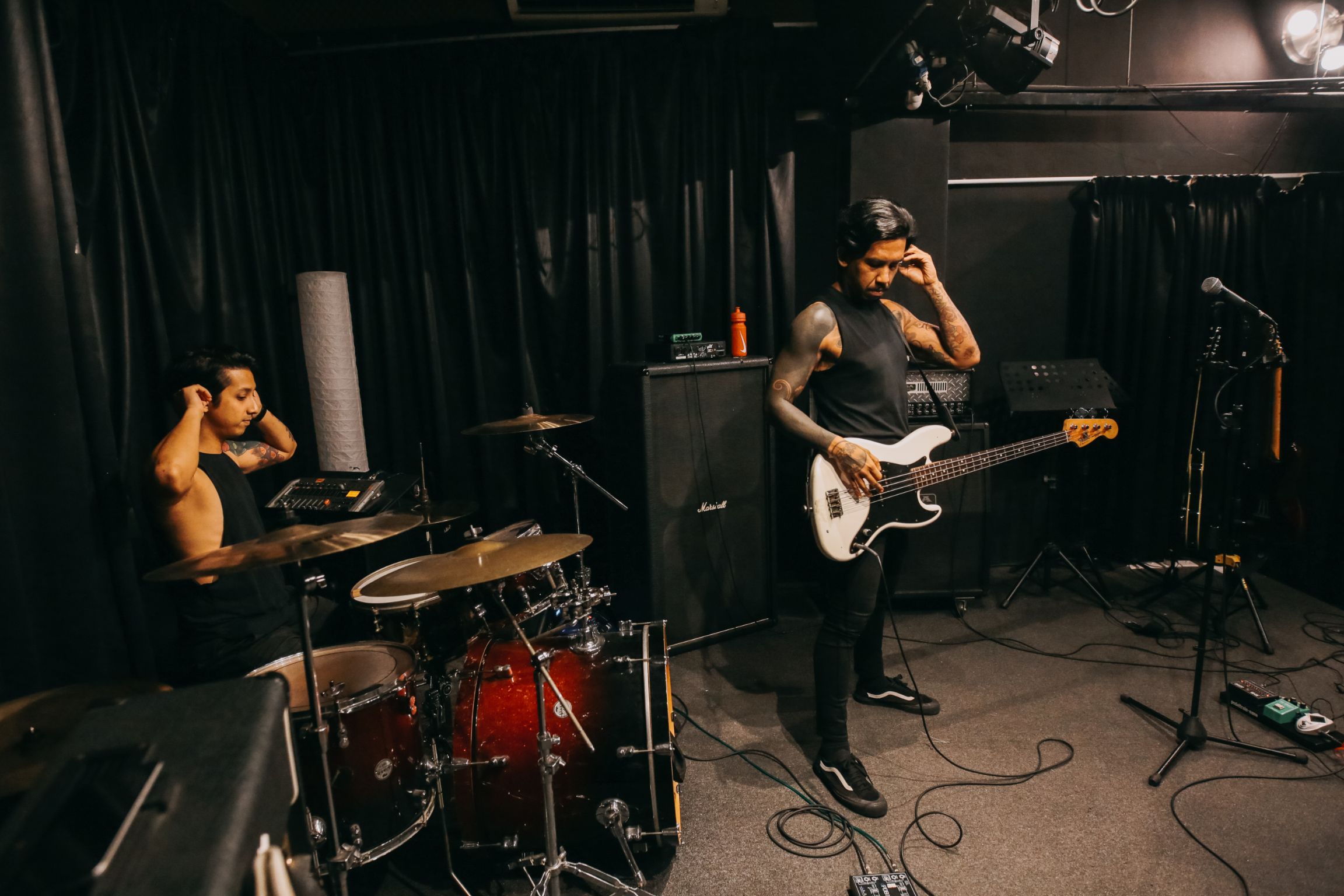 As a band, how do you guys survive in order to keep making on the music that you love?

Ryan: We have jobs. The music dream is pretty much a dream unless you strike gold with luck and the people you meet and the situation that you’re in, but the honest truth is that you have to work for what you want. So if you want music to be a part of your life, you have to work at it, regardless of whether your work is music or a 9 to 5 job. That’s how most of us sustain.

Vinesh: Yeah, for the most part, most of us have 2 – 3 jobs at any given time, just to fund this dream.

Sani: Yess, we have day jobs, 9 – 6, and we do jobs on the weekends too to buy more gear and do more cool stuff on stage and try to be a cool of a band as possible.

Syamir: Batman didn’t have unlimited funding did he? All I’m saying is that he had a job. Hahahaha. And Alfred. We all need an Alfred.

Vinesh: I think it’s essential that any band that takes this seriously has to go through the work, and understand that it is what it is,it’s hardwork and it’s definitely not for the faint hearted. You have to pay your dues. Unless you’re William Hung, you better pay your dues. 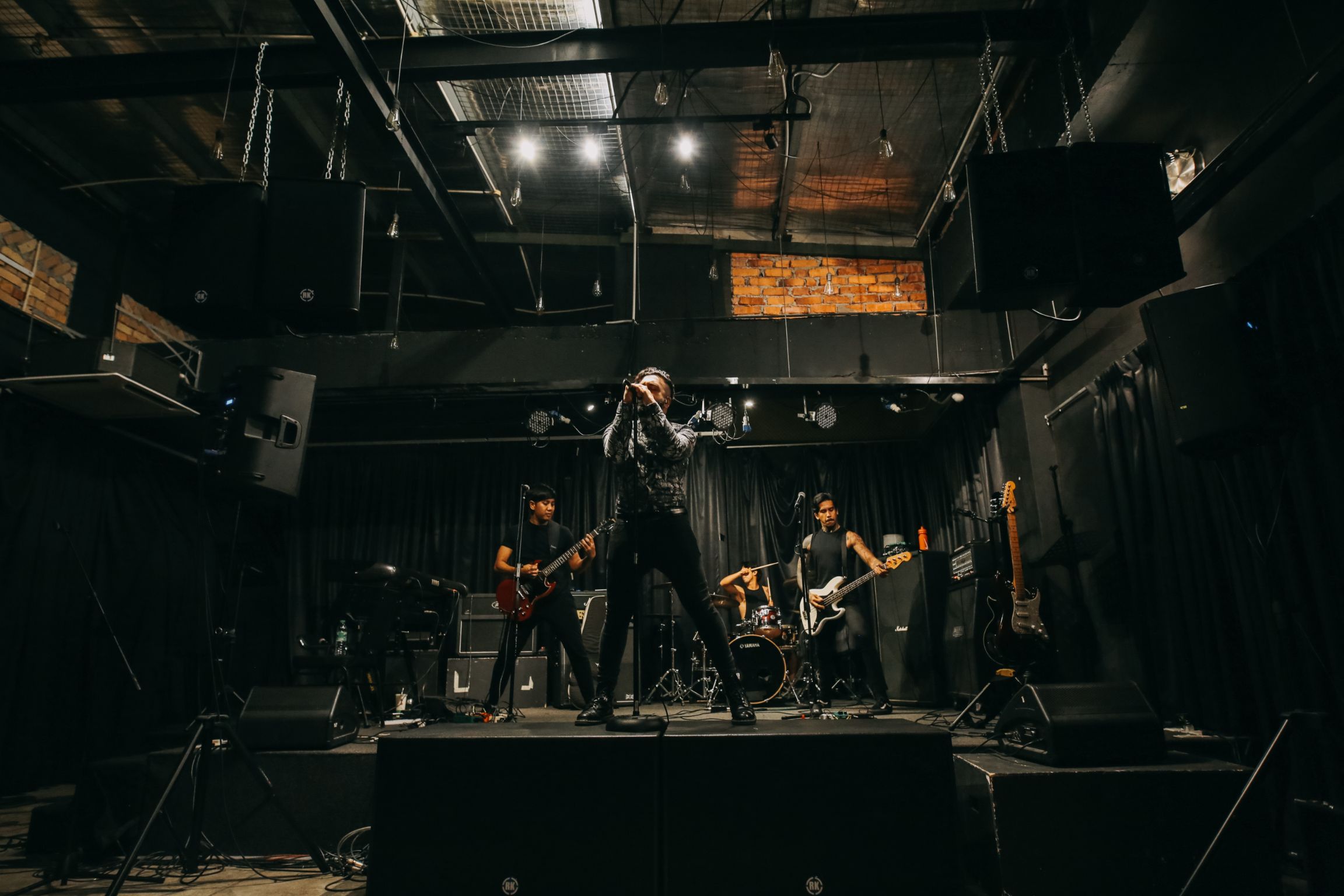 What do you think of the music industry here and its apparent lack of support in the underground scene? Do you think it should stay that way in order for the artists to flourish or should the higher ups lend a helping hand by way of creative funds such as CENDANA?

Vinesh: I guess for us as a band, we understand that the struggle is part and parcel of being in a band, but at the same time if someone is willing to help you out, and as long as our creativity and integrity is not compromised, then we absolutely would welcome a helping hand. CENDANA was essential to us during the creation of this album and we are extremely grateful for the experience.

Ryan: It’s a perceived lack of support right? Because I’ve met with a lot of people who are just afraid to ask, like if you need help, you ask for help. If you want something, you gotta ask for it, and the worst thing  that can happen is that if you don’t get it. And the best that can come out of the worst situation is that you learn from it, and you learn to do better the next time. I do not think that there is a lack of support