We’re not gonna deny that the Air Max 1 definitely had more collaborations, and more popularity as compared to the Air Max 90, but the silhouette did hide a few tricks up its sleeves, and when it came out with a collaboration, you can be sure the wow factor could practically eclipse all the others, accentuated by its apparent understated rarity that only true sneakerheads been knew. Regardless, we’ve compiled a list of collabs and special edition packs to have graced the 30 year old model.

One of the most coveted Air Max 90’s in the market, Japanese label atmos and Nike collaborated to produce a classic using the Air Max 90’s original ‘Infrared’ colorway with a twist of duck camo featured along the toe, tongue and overlaying areas with infrared accents throughout the shoe. 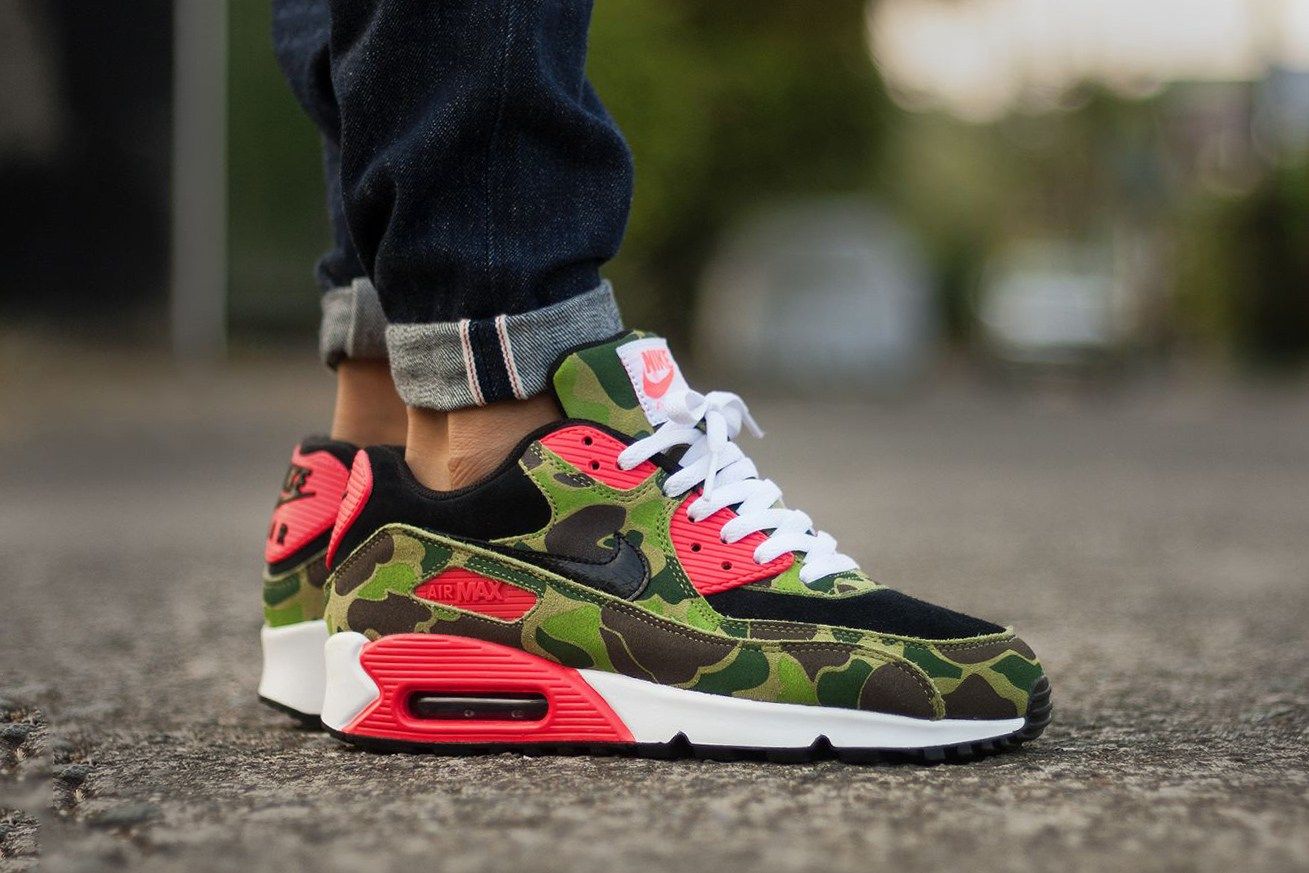 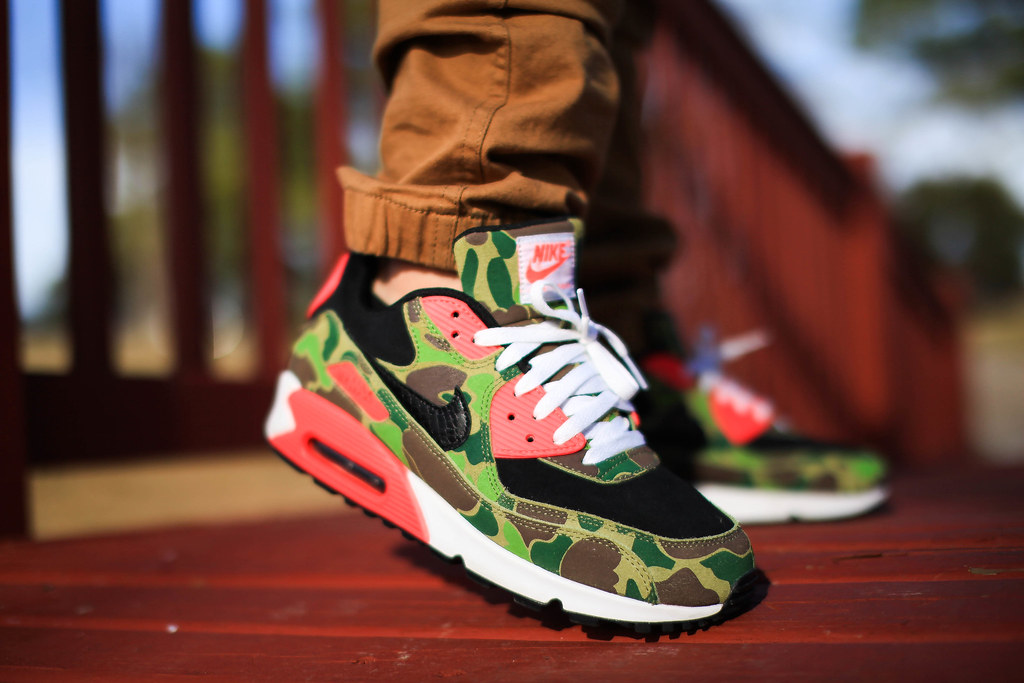 Back in 2006, Nike collaborated with Dutch boutique ‘Patta’ to produce the Air Max 90 ‘Homegrown’ series. Using bright colors inspired by their homeland, the sneakers were released in Patta with a Quickstrike (QS) label in two different colorways, ‘grass’ and ‘orange blaze’. Both sneakers feature a grass-like design throughout the uppers, a white midsole and a gum outsole allowing the Dutch sneakerheads to walk in style in their homeland. During the release at Patta’s store, the pairs came with a CD and a booklet as a way to honor the local messengers of flow. Another version was produced for Patta and Nike’s friends and family (F&F) in a reversed colorway featuring a special ‘state magazine’ tongue tag which is definitely more limited till the extent of being compared to finding Big Foot in the wild. 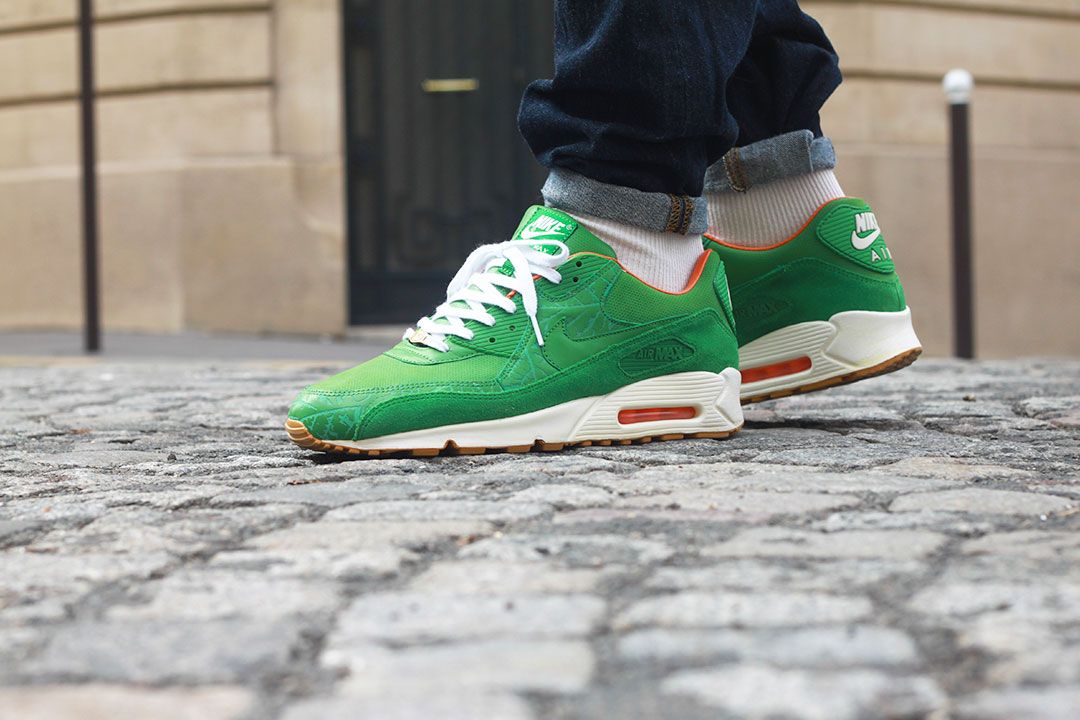 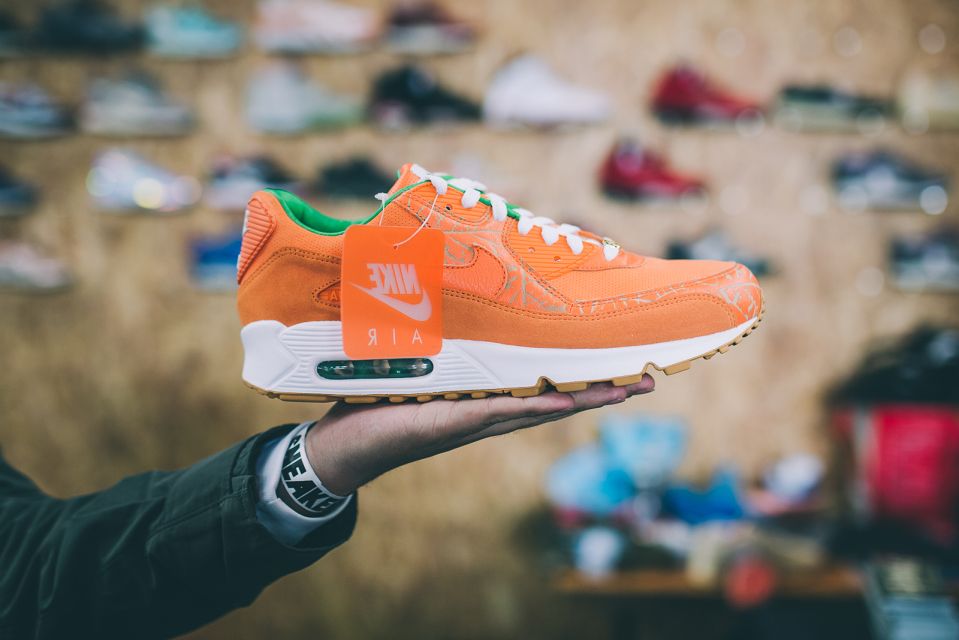 The ‘Warhawk’ got it’s name from the paint job seen on the sneakers itself, inspired by the World War II Pursuit (Fighter) plane dubbed the Curtiss P-40 Warhawk. The paint job features a tiger shark print representing the Flying Tigers, a group of volunteer American pilots who were defending China from the wrath of Japan prior to USA’s entry into World War II. 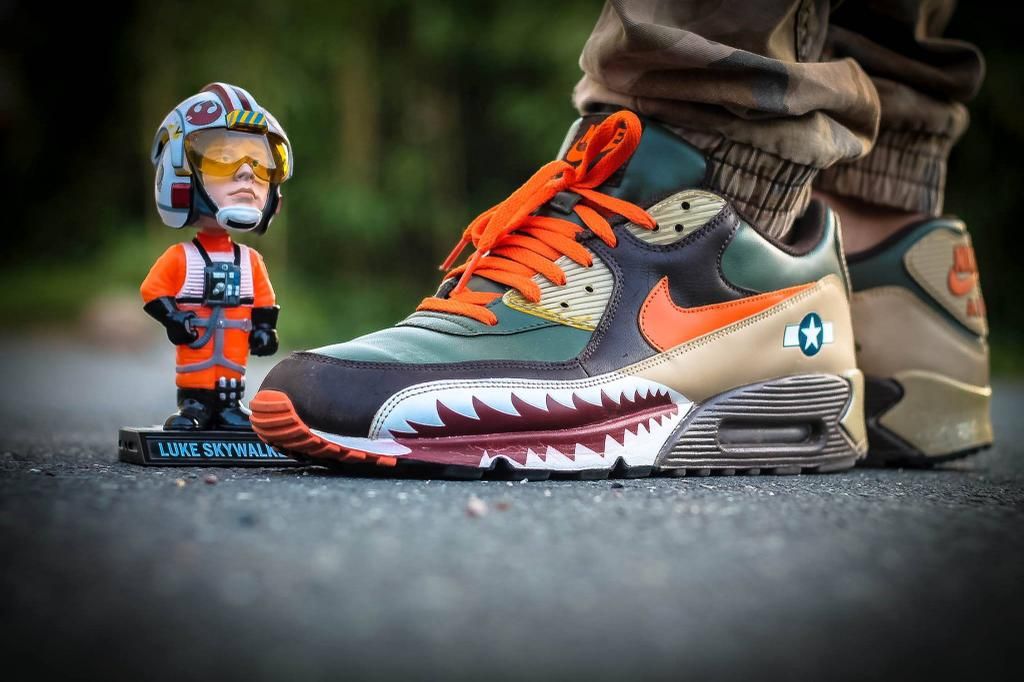 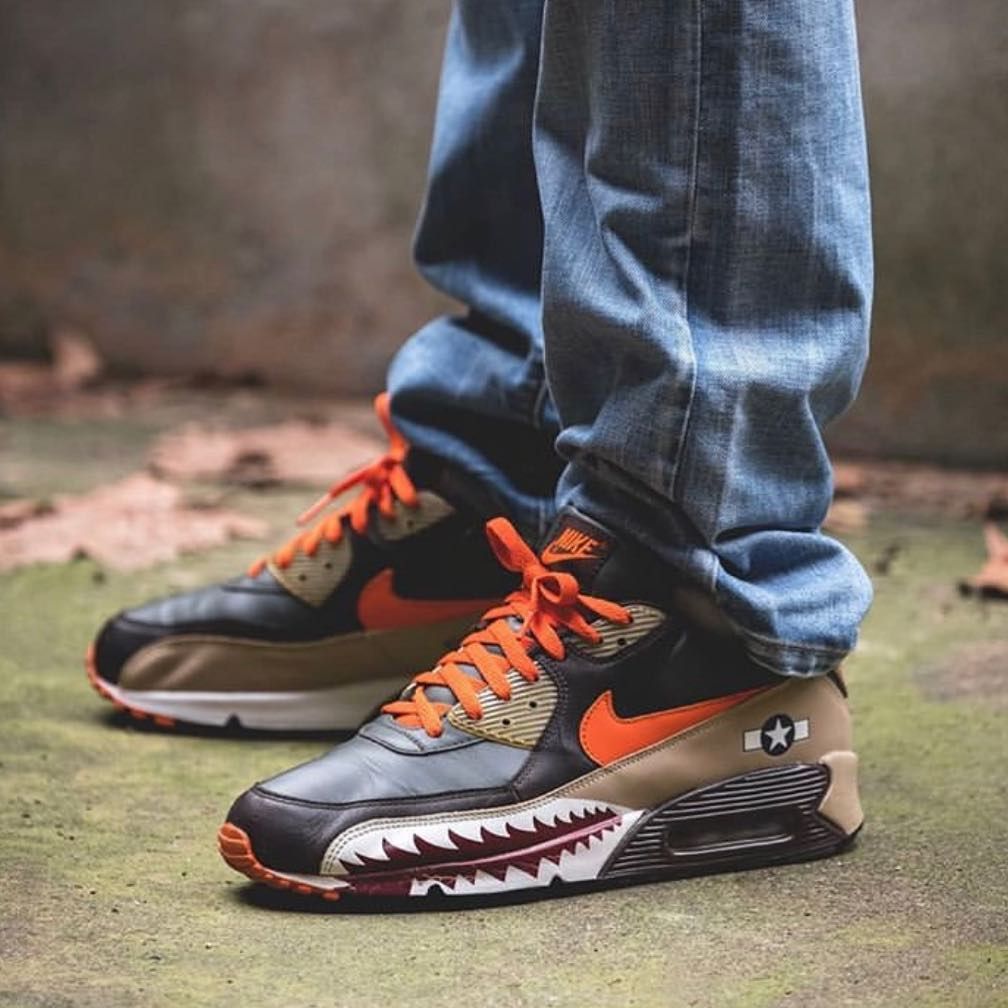 These Air Max 90’s were designed by the artist KAWS himself. Both pairs feature an innovative 4-way stretch textile and is inspired by Nike ACG. Both the White/Volt and Black/Volt colorway were released exclusively at Nike Sportswear at 21 Mercer and Nike Sportswear at The Montalbán. 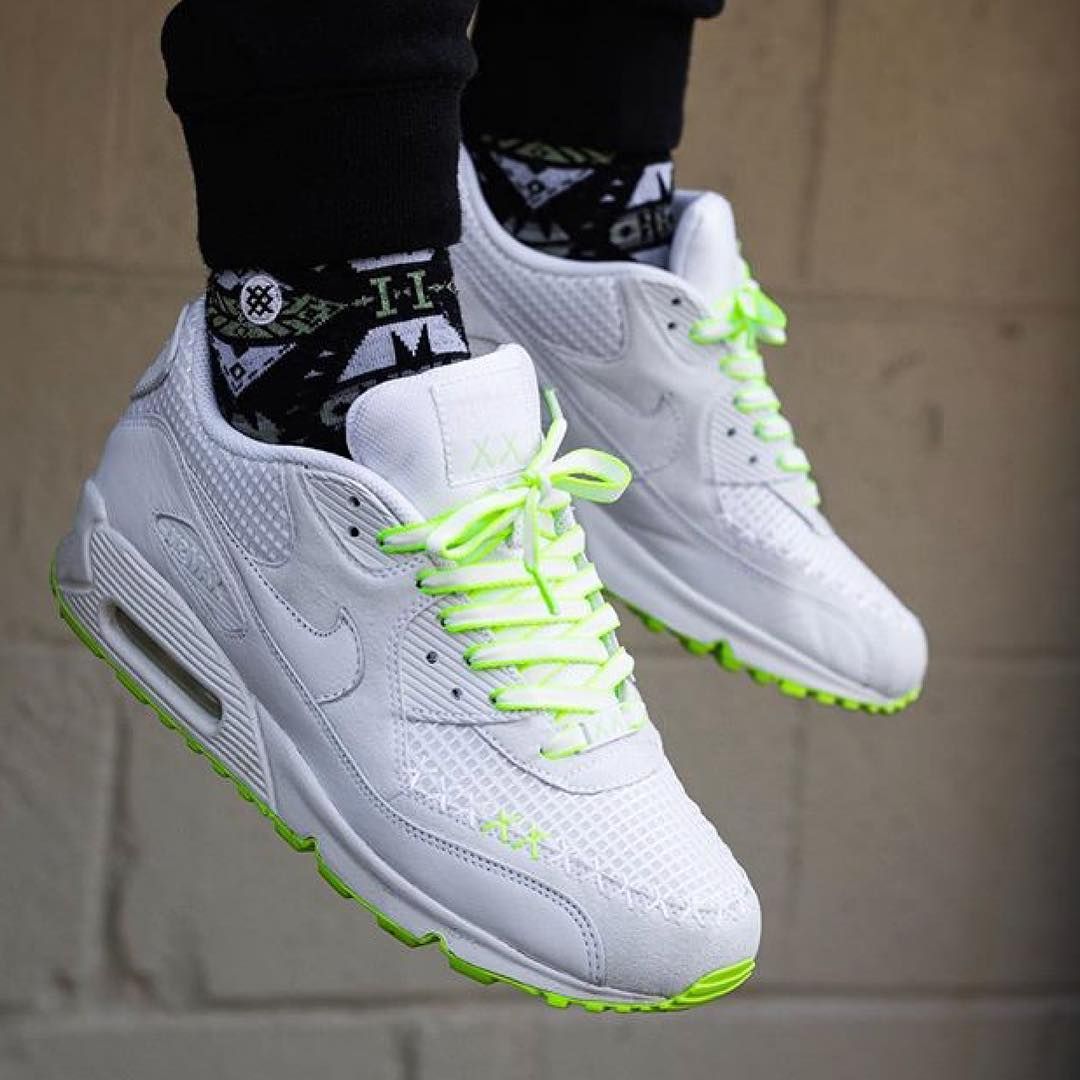 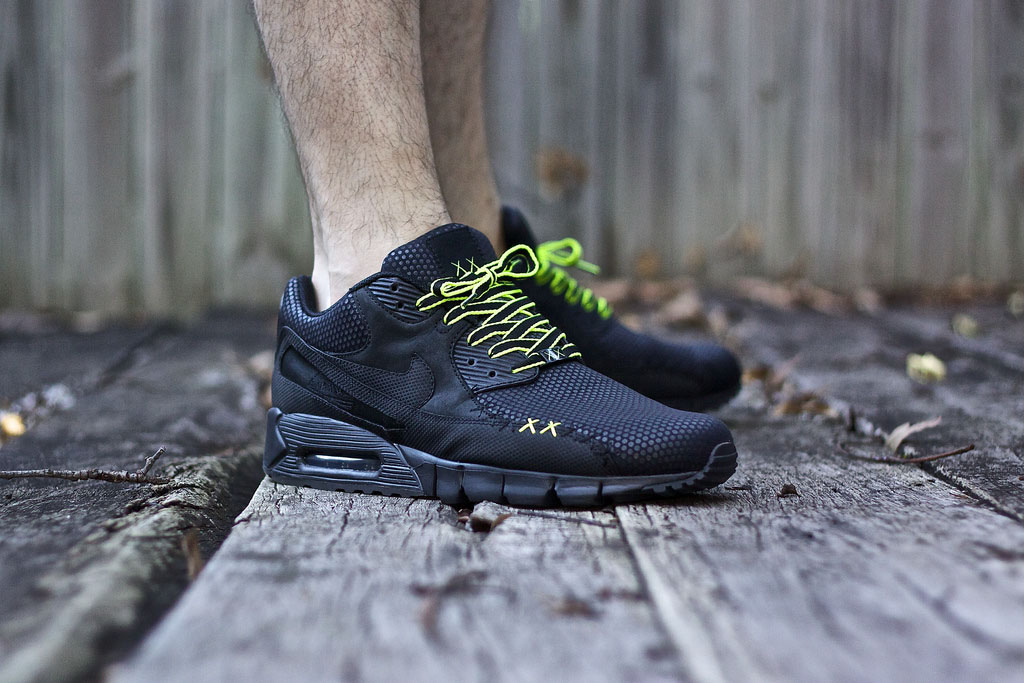 A three-way Nike Air Max 90 collaboration between British rap star Dizzee Rascal, designer Ben Drury and Nike to commemorate the release of Dizzee’s upcoming LP ‘Tongue in Cheek’. The sneakers feature premium materials such as white suede and soft leather, a pink embroidered tongue which spells ‘Tongue’ and ‘Cheek’ on each side respectively, and ‘Dirtee Stank Recordings’ fly beneath the shoe’s translucent outsole. Adding more details, Drury adds 3M elements on the backtab of the sneakers in the form of Dizzee’s figure. 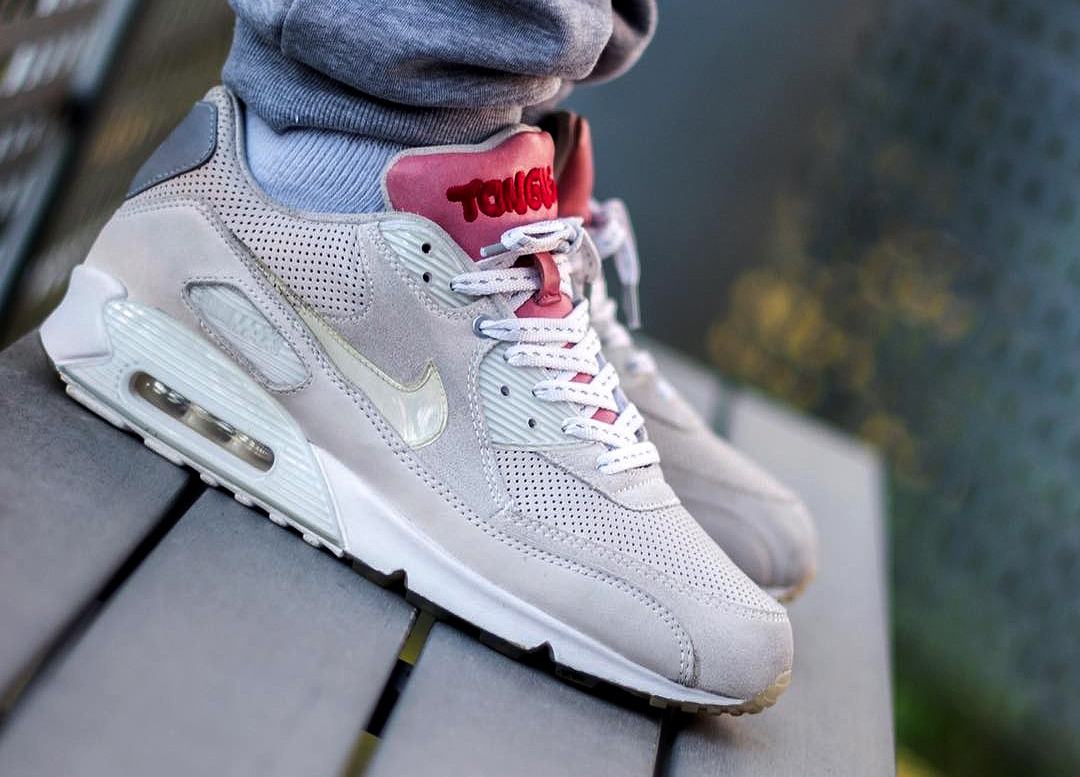 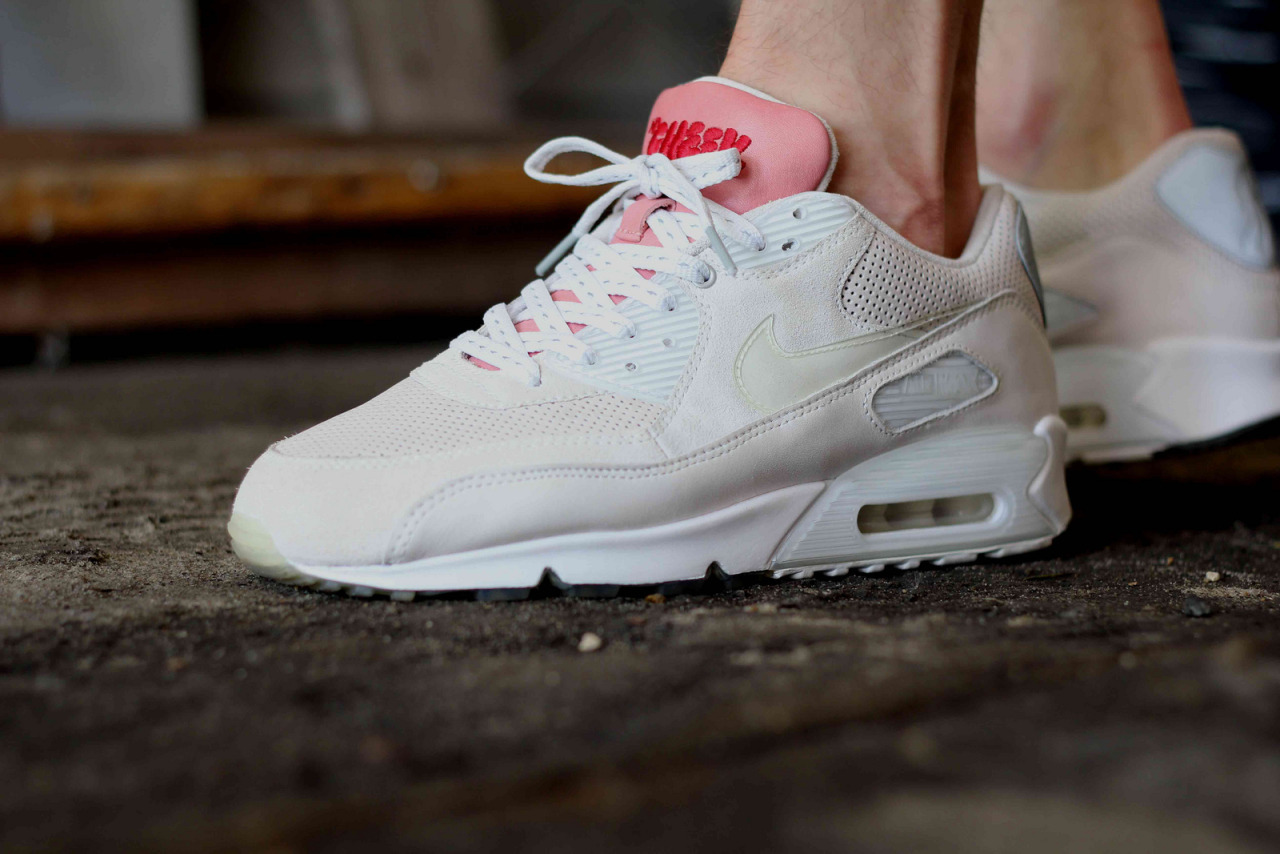 Dave’s Quality Meat is a boutique in New York with a butcher shop theme which is a local favourite sneaker spot. Given the chance to work on a pair of Air Max 90, it was no surprise DQM used the theme of their shop to their advantage to design the ‘Bacon’ colorway. The colorway was meant to resemble scrumptious cuts of pork belly which is often eaten for breakfast with eggs. This collaboration definitely made it into most sneakerhead’s Air Max 90 hit list with it’s unique inspiration and colorway. A good news for anyone who’s aiming to cop a pair, the DQM might be releasing once again this year (2020). 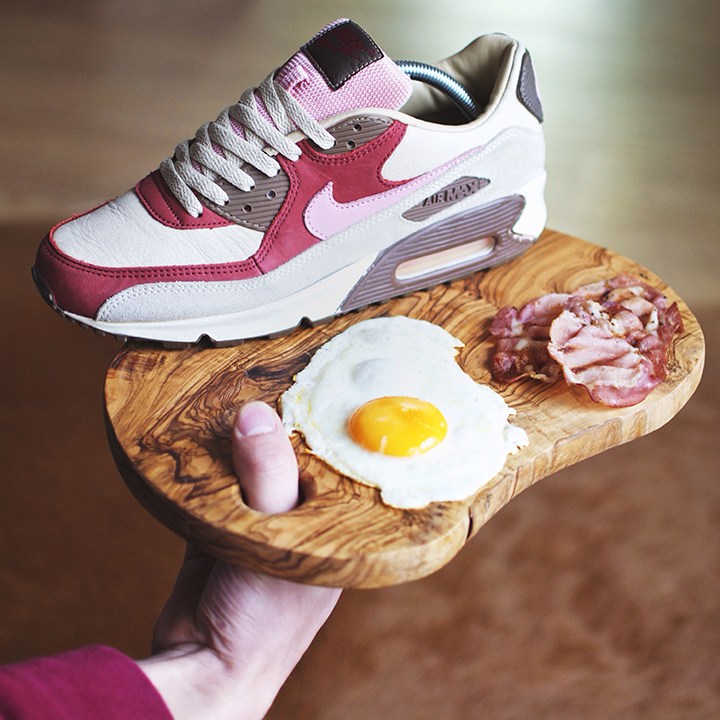 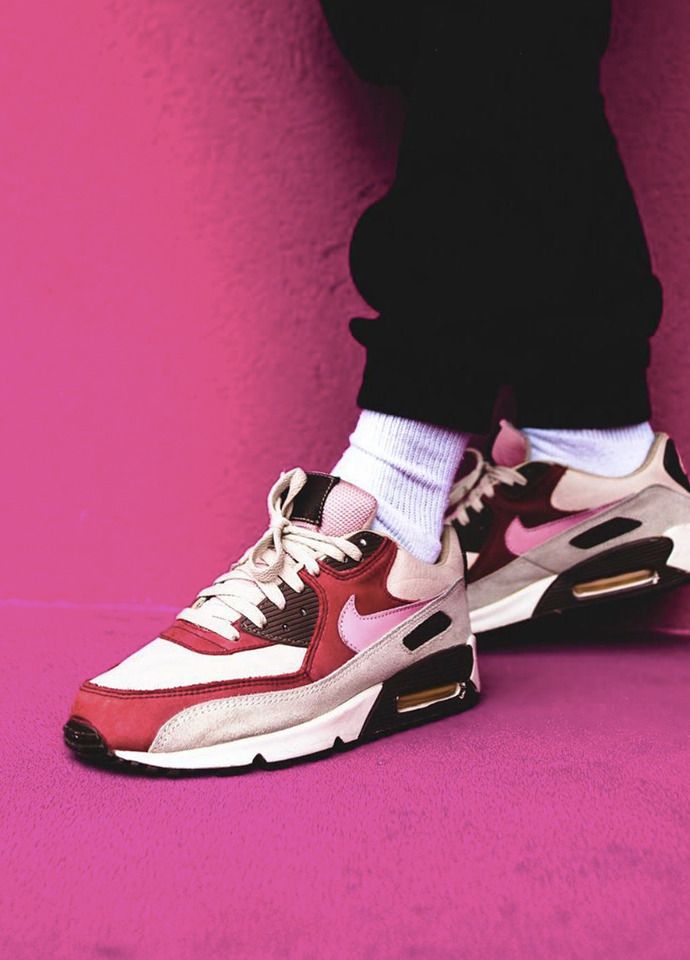 Adopting it’s nickname ‘Crepe’ due to its resemblance to a similar Air Max 1 counterpart, the Nike Air Max 90 ‘Crepe’ didn’t actually feature the iconic crepe outsoles as seen on the Air Max 1 but instead featured premium hemp materials on the uppers. 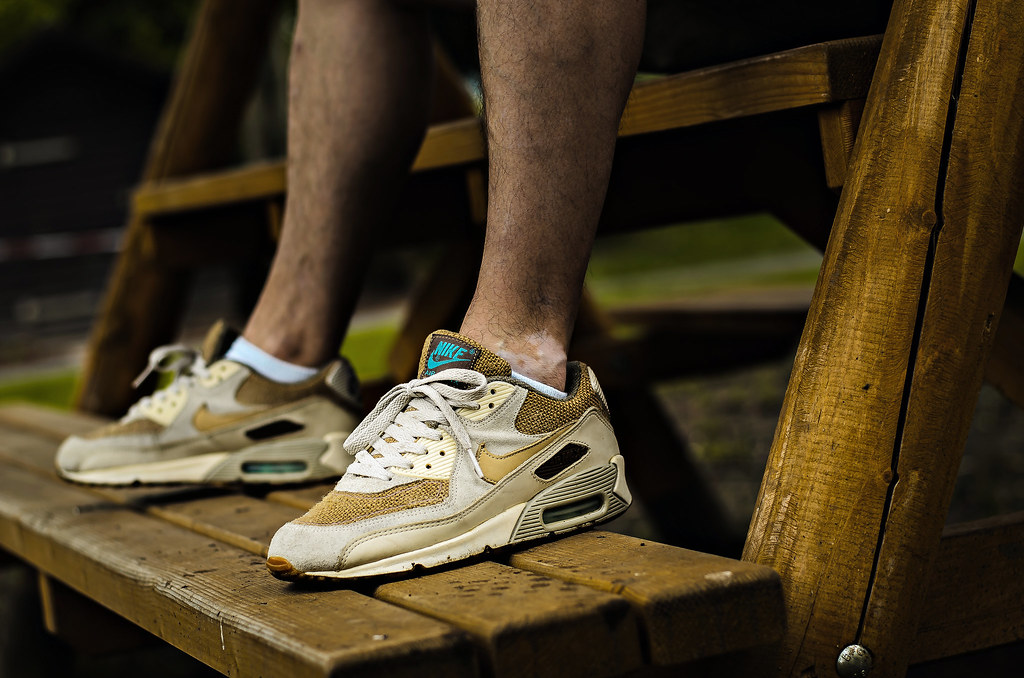 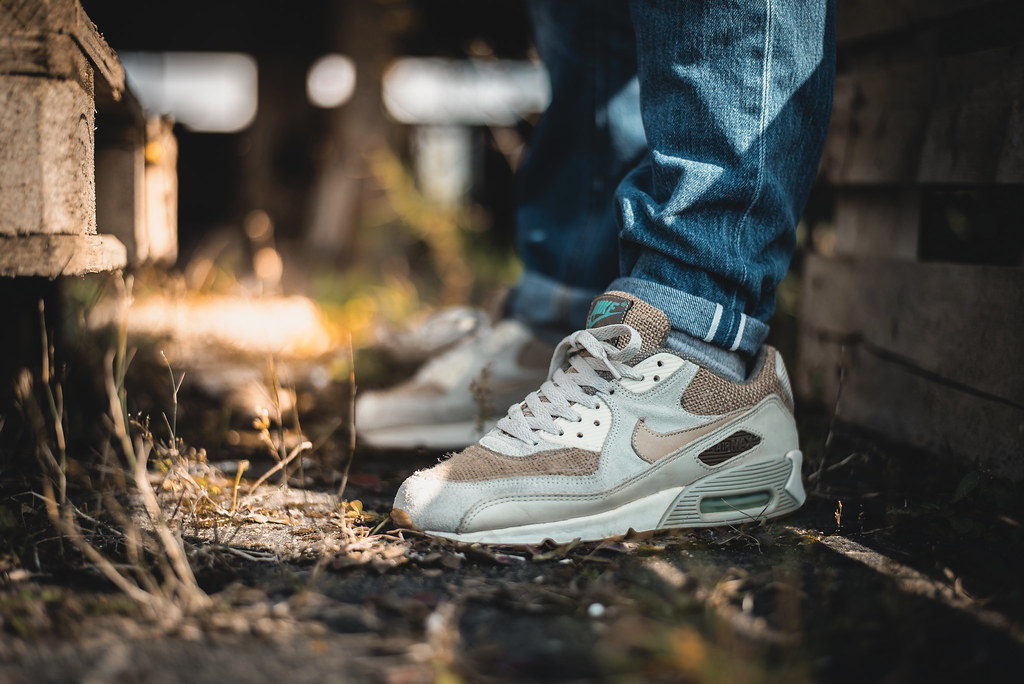 Keith Hufnagel was nothing if not a person who pays his respects to brands and the culture, and when they got a pair of Air Max 90s back in 2007, it was only natural for him to include influences surrounding him, including the 1989 Jordan 4s in ‘Military Blue.’ Keith also added extra crackling motifs on the panels, both as a nod to the legendary elephant print and the ubiquitous earthquake that San Francisco always had. 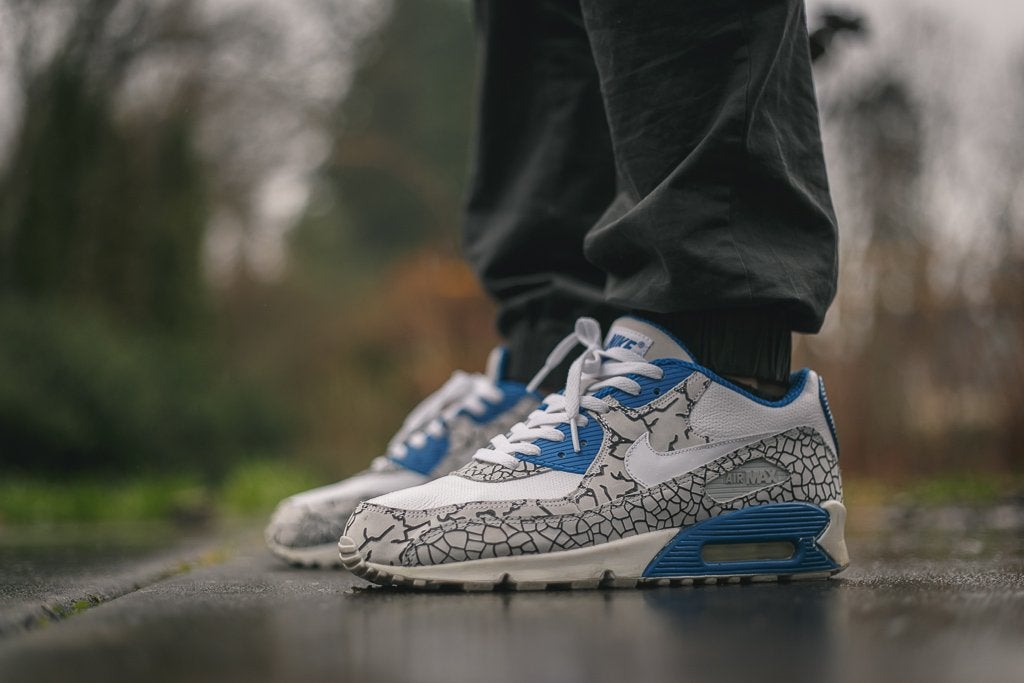 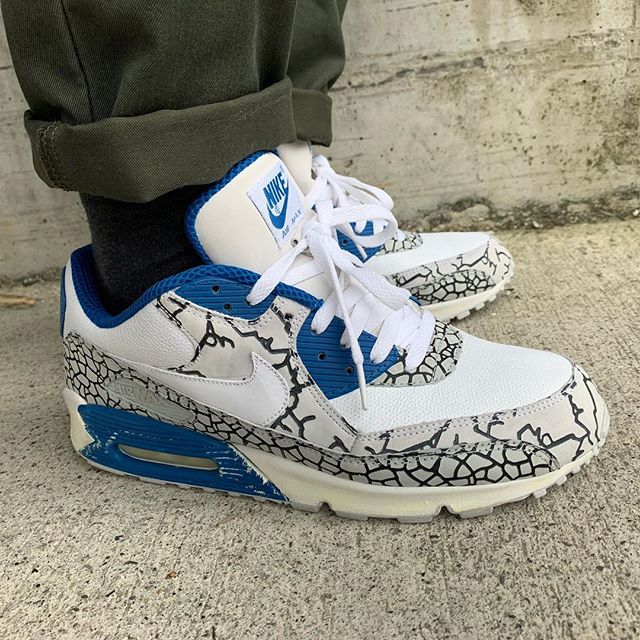 Back in 2006, UK sneaker shop size? dropped an exclusive ‘Clerks’ edition of the Air Max 90, paying homage to the ever so popular tourist destination, Brighton Beach. Apart from the colourway that reflects the overall palette of its surroundings, the sneaker was highly sought after for its premium construction, pairing suede with tumbled leather, accentuated with faux croc print leather on the side panels. It was on a league of its own, and quite none other like it exists. 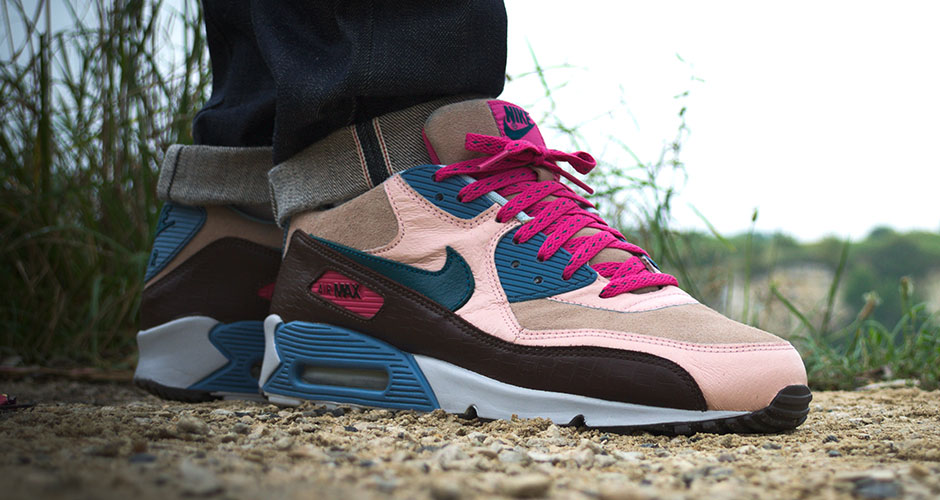 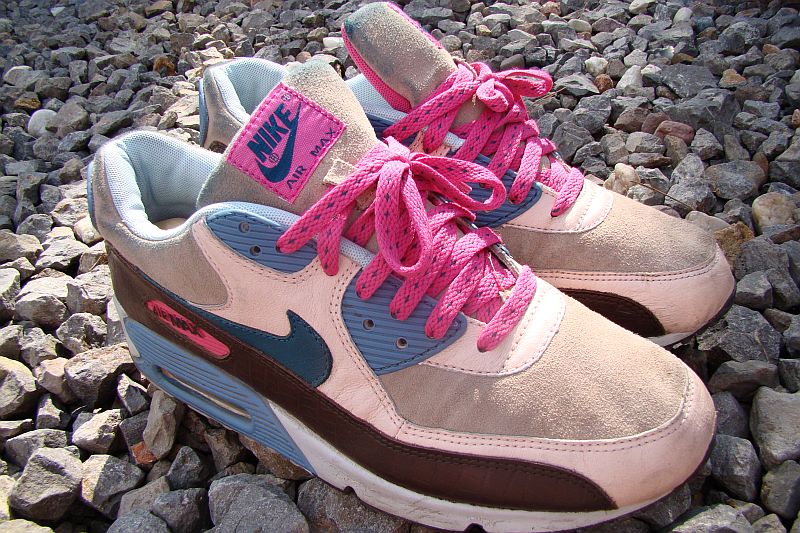